The start of 2017 means the beginning of a bunch of New Year’s resolutions, with weight loss topping the list for the overwhelming majority of people. TV, radio, newspaper and the internet are inundated with advertisements for pills, shots, detox regimen, commercial weight loss programs, gym specials, expensive exercise equipment, etc. So if they are successful, why is it that every year we go through the same cycle of resolutions and then break them after a few unsuccessful months?

The answer primarily lays in your genes, as well as improper dietary habits, and what we see in the food system nowadays vs. what was there just a few decades ago. But that is a long discussion of its own, plus you cannot change your genes. So what can you do?

You might have recently read about one of the Biggest Loser TV show’s contestants who successfully lost over 100 pounds, only to regain it all back a few years later. Whereas emotional trauma may have played an important role in the weight gain, that is not the only reason. Studies have shown that slower metabolic rates account for weight recidivism in all of the show’s contestants. The study, which was funded by the National Institutes of Health (NIH) and published in the journal Obesity, followed 14 (six men, eight women) of the 16 contestants who competed in the show’s eighth season.

All but one regained much of the 100 pounds or more they lost through The Biggest Loser’s intensive dieting and exercise regimen, and five had returned to within 1% or above their original weight. Contestants also had slower metabolisms, which is expected after a diet ends, but is not expected to stay that way years later. This process is known as metabolic adaptation, wherein patients who lose massive amounts of weight experience a slowing of their resting metabolic rate, burning fewer calories while at rest. Those patients have to consume at least 500 fewer calories per day to maintain the weight loss. Interestingly, this phenomenon is not seen in bariatric surgery patients. Per the authors, a matched group of gastric bypass surgery patients who experienced significant metabolic adaptation six months after surgery had no detectable metabolic adaptation after one year, despite continued weight loss. The lack of long-term metabolic adaptation following bariatric surgery may reflect a permanent resetting of the body weight set-point.

How about diets? How about not. According to research presented at an internal medicine meeting, weight loss programs do help people keep the pounds off, but long-term success is still rare. Of the 66,000 patients enrolled in weight loss programs over 5 years, less than half had lost more than 5% of their weight. More importantly, only 2% of them stuck with the program and did not drop out. Those who stayed lost only 8% of their weight in the long term. Compare that to bariatric surgery patients: those who have pursued gastric bypass or vertical sleeve gastrectomy lose 60-80% of their excess weight and in the longer term, keep more than half of it off. One question patients should ask themselves is why none of these commercial weight loss programs with ads all over TV ever publish longer-term data similar to what surgeons do. 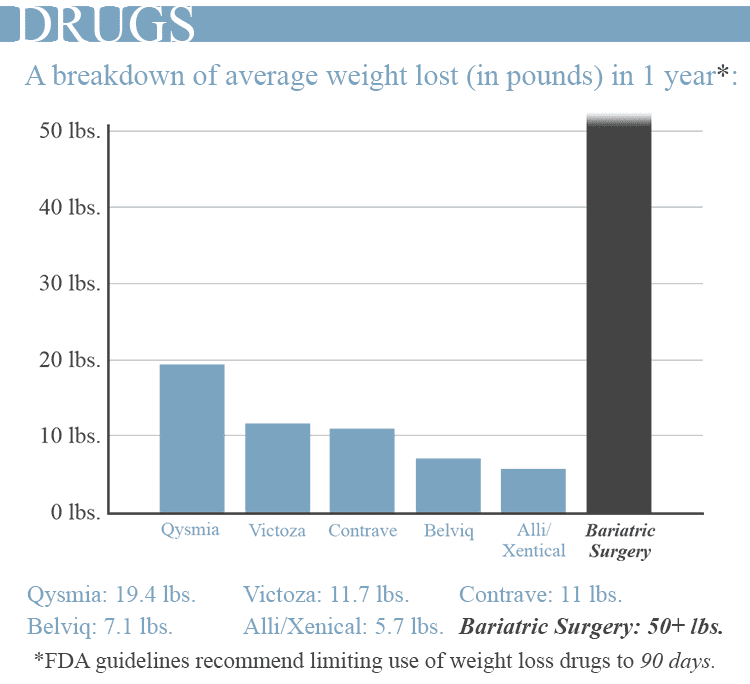 So drugs may be the answer, right? Wrong. In a meta-analysis of 28 studies and 29,000 patients, researchers at UCSD looked at results of various medications and found very minimal weight loss results in the short term and no data in the longer term. The researchers found that a median 23% of placebo participants had at least 5 percent weight loss vs. 75% of participants taking phentermine-topiramate (Qysmia), 63 percent of participants taking liraglutide (Victoza), 55% taking naltrexone-bupropion (Contrave), 49% taking Lorcaserin (Belviq), and 44% taking orlistat (Alli/Xenical). All active agents were associated with significant excess weight loss compared with placebo at 1 year: Qysmia, 19.4 lbs.; Victoza, 11.7 lbs.; Contrave, 11 lbs.; Belviq, 7.1 lbs.; and Alli/Xenical, 5.7 lbs. Compared with placebo, Victoza and Contrave were associated with the highest odds of adverse event-related treatment discontinuation. So essentially, at one year, patients lost 5-20 pounds at one year plus a lot of possible dangerous side effects while they took the medications or when they stopped it. Now compare that with what patients typically achieve with gastric bypass or vertical sleeve gastrectomy: at least 50lbs or more. Plus you get to keep the weight off. With drugs, what will happen to your weight when you stop taking them especially if you follow FDA guidelines to limit their use to 90 days? Probably a major rebound.

If you are suffering from obesity and tired of yo-yo dieting and drugs and fads, it’s of the utmost importance that you seek the most effective and progressive treatment options available to you. At University Bariatrics we consider all the options during your consultation, and help create a customized weight loss plan to help you along your journey to a healthier life. Call us or visit us on the web to attend a free bariatric surgery seminar and set up your personal private consultation.